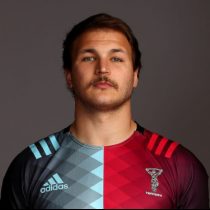 Esterhuizen's first taste of first-class rugby came for the Sharks XV during the 2013 Vodacom Cup competition. He made his debut in a 72–6 victory against the Border Bulldogs, coming on as a substitute in the second half.

Further substitute appearances followed that season in matches against the Boland Cavaliers and Eastern Province Kings.

Esterhuizen was included in the Sharks wider training squad prior to the 2014 Super Rugby season, scoring a try for them in their warm-up match against Saracens and was subsequently selected in the final Super Rugby squad for 2014.

At the beginning of the 2017 Super Rugby season, he had scored 10 points in 29 appearances since his debut in 2014 against Bulls.

Esterhuizen had a fantastic Super Rugby season for the Sharks as he played in 11 of the Sharks 16 matches.

He became unavailable for the Sharks in the Currie Cup as he joined Japanese side Munakata Sanix Blues.

Esterhuizen built on a strong 2017 season with the Sharks and was in fine form during the opening round of the 2018 Super Rugby season, which earned him a spot in the Springbok squad for the June Internationals against Wales and England as well as for the Rugby Championship.

He went into the 2018 Rugby Championship with 2 test caps.

In May 2020, Esterhuizen agreed to join English club Harlequins ahead of the 2020-21 season.