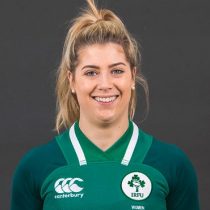 Hughes was named in the Ireland squad for the 2017 6 Nations.

Hughes is currently a student and lives in Tullamore.

After 7 caps with Ireland Women, Hughes was named in the Irish squad for the 2019 Six Nations tournament.

Ahead of the Women's 2020 Six Nations, Hughes was once again named for the Ireland squad. She has had 9 appearances and will be looking to add to this total.