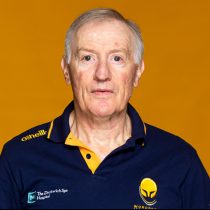 The former South Africa assistant coach practised law for 20 years before pursuing a professional rugby coaching career as an assistant coach for Western Province. Solomons was an assistant coach during the Springboks' record run of 17 victories, which included an unbeaten Tri-Nations success in 1998 and record wins over Scotland (68-19), France (51-10) and Wales (96-13).

It was during this time that he coached the Western Province to successive Currie Cup Premier Division finals, and took the Stormers to the Super 12 semi-final in 1999, before beginning an impressive three-year term at Ulster in 2001.

He then became Barbarians coach in 2003 when they defeated England, Scotland & Wales and assistant coach to Nick Mallett when the Springboks & All Blacks were defeated in 2010 & 2011

An appointment as director of rugby of the Southern Kings came in 2009, remaining with the role until 2013 and led them to 2 Currie Cup titles. In 2013, he was appointed as the head coach of Edinburgh Rugby, and by the end of his second season, Edinburgh had lifted the 1872 Cup and reached the European Cup Finals.

In May 2015 he extended his contact for a further season. On 28 September 2016, Solomons stepped down from is position at Edinburgh four weeks into the 2016–2017 season.

On 21st February 2017, Solomons joined Bristol Rugby as a coaching consultant. The South African joins the coaching set-up for the remainder of the Aviva Premiership campaign.

In October 2017, Solomons joined Worcester Warriors on a short-term deal to assist Gary Gold, later in Decemeber that same year he was confirmed as the side's new Director of Rugby with Gold leaving to coach USA.