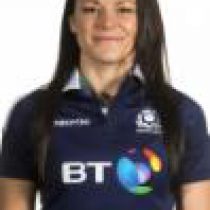 Deborah won her first international cap against Ireland in the 2014 6 Nations and played the full 80 minutes in each of the 2016 6 Nations games, while also being included in the Scotland 7s program.

The computer science teacher was included in the Scotland Women squad for the 2017 Six Nations Tournament.