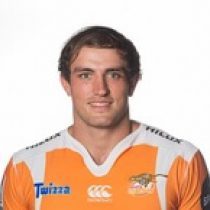 Educated at Kempton Park High, Visser is another line out talent to join the Bulls. Excelling in the U19 Currie Cup in 2012, Dennis continued to perform in 2013 and made the Bulls Vodacom Cup team and represented the Baby Boks in the IRB Junior World Championship.

Following the conclusion of the Junior World Championship joined the Blue Bulls where he represented the youth sides as well as the Vodacom Cup side.