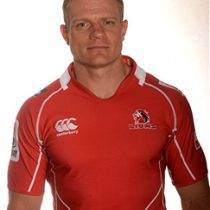 Representing the Leopards at U19 & U21 level, van Rensburg then went on to make his Vodacom and Currie Cup debut in 2004. Drafted in for Lions Super Rugby action in 2009, Deon then got selected for Emerging Springbok team, which took on the British & Irish Lions. After 6 seasons with the Leopards, Deon then signed with the Lions in 2010 where he won the Currie Cup in 2011 and helped the franchise get promoted back into Super Rugby for 2014.