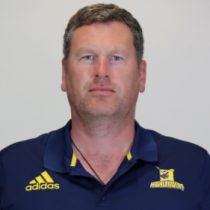 Born in Timaru, Delaney left NZ as a 19-year-old lock/number 8 to play in Japan, further stints in France and the UK followed.

A born and bred Cantabrian, Delaney was appointed head coach of Canterbury Rugby in 2016 from London Irish, where he has been Head of Rugby Operations following on from being Head Coach.

Prior to this, he was Director of Rugby at Nottingham RFC where he helped take the organisation from a part time rugby club through to a fully operating professional rugby program.

His first coaching position was with Nottingham where he was the head coach then director of rugby, before returning to London Irish in 2012 as their forwards coach. He later became head coach and then rugby operations manager

During his career in the UK he has been invited to coach the world famous Barbarians on two occasions. Delaney started his playing career at Linwood Rugby Club before heading overseas in 1993 to play in Japan, UK and France.

In September 2017, Highlanders appointed Delany as their new defence coach for the 2018 Super Rugby season.

Delaney joined the Highlanders from his position as Head Coach for Canterbury on a two-year contract from 2018, after winning six of seven games and the 2017 Mitre 10 Cup Premiership title.

In May 2019, he replaced Byron Hayward as defence coach of Scarlets and linked up with then Scarlets head coach Brad Mooar when his 2019 Super Rugby commitments were over.

In February 2020 Delaney was confirmed to take charge of Scarlets ahead of the 2020-21 campaign.