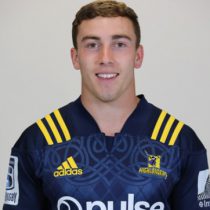 Utility back Josh McKay represented the New Zealand U20s at 2 World Rugby Under 20 Championships in 2016 & 2017 winning the latter.

McKay was selected in the Canterbury squad ahead of the 2017 Mitre 10 Cup and will get his first start in the competition in the opening match against Tasman, following an impressive debut in the side's Ranfurly Shield defence against Mid Canterbury.

McKay featured on the wing throughout Canterbury's title defence, despite being primarily a flyhalf, scoring 6 tries.

His performances caught the eye of the Highlanders coaching staff, who signed the youngster for the 2018 Super Rugby season.

McKay is an elusive and quick winger/fullback who had a couple of cracks in 2018 with some blistering breaks against the Rebels in Dunedin.

With glimpses of promise in 2019, 2020 was another chance for young McKay to prove himself on the paddock in the Highlanders jersey, and the youngster did just that - emerging as one of the stand-out players of the Super Rugby Aotearoa tournament.

His talents caught the eye of the Crusaders who signed McKay for the 2021 season before Glasgow Warriors snapped him up for 2022.