How things stand after Round 2 of Super Rugby AU

The Reds are leading the pack after 2 rounds of Super Rugby AU with a victory and a draw under the belt.


Hot on the Reds' tail, however, are the Brumbies and Waratahs who are both sitting on 5 points, the former with a game in hand.

The Rebels and Reds held each other out to the very end in Round 2 with a vigorous tussle ending in an 18-18 draw after two five minute periods of extra time elapsed while the Waratahs managed to pull one over their Western Force rivals in Sydney, 23-14. 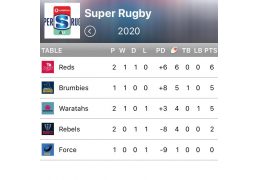