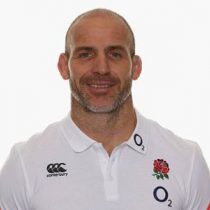 Gustard's playing career started at Leicester Tigers in 1997 after a successful tour as captain of England's u21 side. In his time at the Tigers he was a member of the famous Heineken Cup win against Stade Francais in 2001 and also won 4 Premiership titles in his 5 year spell.

In 2002, Gustard left for London Irish and spent 4 years at the Exiles, including a spell as captain. In 2006, he moved to the North of London with Saracens and made 48 appearances before Eddie Jones made him assistant 1st team coach. After Jones left the club in 2009, Gustard was appointed defence and forwards coach under Brendan Venter and held the role for 6 years.

In 2015 after transforming the Saracens defence, Gustard linked up with Jones again. This time at the RFU with England, as he was appointed defence coach.

The former Leicester player joined Eddie Jones' England staff at the start of 2016 and was contracted to the RFU until the end of the 2019 Rugby World Cup in Japan.

In June 2018, Harlequins agreed compensation with the Rugby Football Union & signed Gustard as their new head of rugby, replacing John Kingston who left by mutual consent.

In January 2021, Harlequins and Gustard mutually agreed that he will leave with immediate effect to enable him to pursue other opportunities.