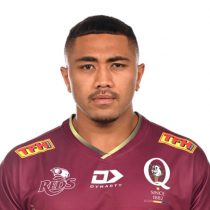 A fellow Queensland pathway product having represented his state and country at U20s level, Asiata won the 2017 NRC title with Queensland Country under coach Brad Thorn before departing overseas to New Zealand and also the United States.

Asiata returned home to Brisbane at the start of 2021 and made his Queensland debut in Round 1 against the Waratahs at Suncorp Stadium and played a further five games for the Reds in 2021.

In July 2021, he signed a new one-year contract extension with the Reds.