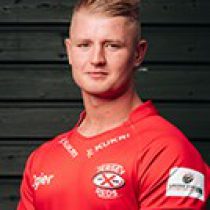 Voss signed a scholarship with Gloucester's academy in 2014 and played two seasons with National One side Hartpury College.

Having made his debut as a 17-year-old, he played 30 games in the island side's first two Championship season

Voss joined Coventry on a dual-registration in the start of the 2018/19 season, playing 14 times for the Blue-and-Whites, mainly as a lock forward but also on the blindside flank.

In April 2019, he signed a new two-year deal at the Butts Park Arena.