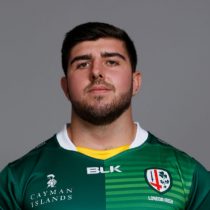 The hooker made his Ealing Trailfinders debut when he came off the bench in the British and Irish Cup against Rotherham Titans in February 2016 and later in 2016 he toured Canada with England Counties after impressing with Surrey in the Bill Beaumont Cup.

Cornish's emerged from the Trailfinder's professional academy, and after an impressive 2016/17 campaign with the side, in which he made 23 appearances and scored 2 tries, he has earned his first fulltime contract with the club.

In 2018, he was an ever-present in the Ealing matchday squad and played a key role in winning the B&I Cup in a memorable final against Leinster, whilst in the 2018/19 season he continued to feature week-in-week-out and battle with the likes of Alun Walker and George Edgson for the starting shirt.

In February 2019, Cornish signed a new deal with Ealing Trailfinders.

After 90 appearances for the side, he signed a deal with London Irish.