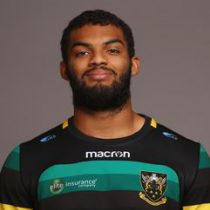 Onojaife is an English Born Lock who moved to Dubai with his family at the age of 13. Je started playing rugby at Jumeirah College.

Following an impressive summer camps with Saints in 2011, Jordan was picked up by the Saints Academy and joined Stowe School where he continued his rugby development.

Jordan became an important member of the Wanderers squad, playing in a vast number of Aviva 'A' League matches.

Jordan became a European champion with the England Under-18's in 2013 and was being called up to the Under-20 squad for the 2013 Junior World Championship in New Zealand.

In March Ealing announced that the big second rower would join the club on a two-year deal.

May 2019 saw him sign a deal with Bedford Blues.