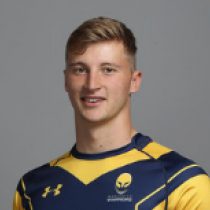 Alex Hearle was called into Warriors first-team action while he was still at Shrewsbury College as he came off the bench to play against Wasps in the Anglo-Welsh Cup at the Ricoh Arena in 2016.

He was soon named in the Warriors Senior Academy ahead of the 2017/18 campaign and made two more appearances for the first-team that season, as well as impressing for Worcester Cavaliers in the Premiership Rugby A League.

Hearle spent most of the 2018/19 season on loan at Birmingham Moseley, helping them to secure their National One status.

and was involved in Warriors' matchday squads three times against Saracens during the 2018/19 season - featuring once as a replacement in the Premiership Rugby Cup semi-final at Sixways.

His first senior try came as a replacement for Dean Hammond in the Premiership Rugby Cup victory over Leicester Tigers in the opening match of the 2019/20 season.

But he sustained an ankle injury and that match and, following surgery, was sidelined for up to four months.