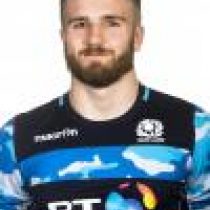 Crosbie, who is from Mid Calder, started his rugby at Livingston before moving on to Currie and is now a BT Sport Scottish Rugby Academy member.

Able to operate across the back-row, he has been a permanent fixture in Currie’s emerging side since breaking into the first-team seasons ago.

Following a string of impressive performances with the Scotland under-20 squad during their successful World-Cup campaign in Georgia, Crosbie was asked to join Edinburgh’s pre-season training camp in St Andrews.

The abrasive back-row made an impression on the capital side’s coaching staff and began his breakthrough into first-team action.

Crosbie was rewarded for his form in Edinburgh colours when he was called into Scotland's Six Nations training squad ahead of the 2019 campaign.

In January 2020, he was again called up to the Scotland squad for the 2020 Six Nations.

As of June 2020, Crosbie has made 39 appearances for Edinburgh and has scored 20 points.