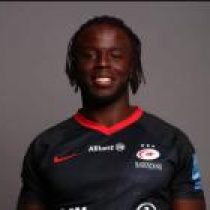 A powerful, explosive winger, Rotimi graduated from Loughborough University with a degree in Chemistry.

His time in Leicestershire saw him compete in National One, his first taste of men’s rugby, as well as represent England at Under-18s and Under-20s.

Segun made his professional debut in the Anglo-Welsh Cup and earned a first Premiership outing against Leicester Tigers in February 2018.

The flyer, who ran the 100m in 11.03 seconds in his school days, was key to Saracens’ success in the Premiership Rugby Cup and Premiership Shield in 2018/19 and was rewarded with a maiden league start against Exeter Chiefs towards the end of the campaign.

In February 2021, he signed a new two-year deal with Saracens.