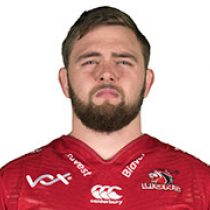 He earned his Currie Cup Qualifications call up in the same year. In 2017 he earned a Super Rugby call up from the Lions being named on the bench in their opening game.

Johannes played 15 times in 2017 Super Rugby, mainly as a replacement tighthead off the bench.

He signed for Montpellier in November 2017 as a medical joker for Jannie du Plessis.

Jonker again fulfilled a second spell as a medical joker in January 2020.

In February 2021, Jonker signed a two-year deal with Ealing Trailfinders.