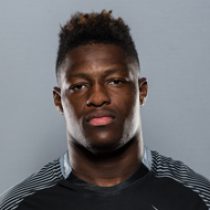 England Students cap Simon Uzokwe joined the Falcons in the summer of 2016 from Darlington Mowden Park, for whom he played during his studies at Sunderland University.

Originally coming to Mowden as a hooker after impressing for Eastern Counties against Durham, the former Ipswich forward spent three seasons in Northampton Saints’ academy.

He made a name for himself with a prolific try-scoring run during Mowden’s 2015-16 season, much of which was spent playing at flanker, before earning his England Students cap.

January 2018 saw him re-sign for the Newcastle Falcons' 2018 season and beyond.