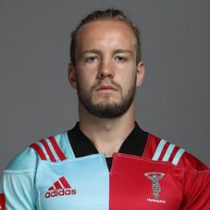 Walker graduated from Harlequins Academy and joined the from Leicester Tigers in 2010.

In the 2015/16 season, Walker finished as Harlequins’ top try scorer with 13 tries from his 16 appearances.

August 2016 saw him re-sign with the Harlequins.