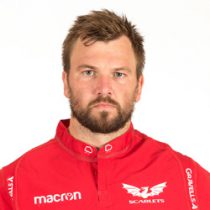 Educated at Alexander Road High in Eastern Cape, the physical lock forward left for the Lions in his first year out of school.

A BabyBok at the 2009 IRB Junior World Championships and Vodacom Cup debut in the same year, Bulbring then made the step up to Super Rugby for the Lions in 2010 and 2011. 2012 saw the lock signing with the EP Kings and went on to play for the Southern Kings in the 2013 Super Rugby season. David played the 2013 Currie Cup with the Bulls.

In September 2016, he signed for Scarlets on a three-and-a-half year contract. He stated his desire to play international rugby with Wales once he is qualified under residency.

The former Springbok u20 lock, Bulbring spent three seasons with the Scarlets, making 79 appearances and sharing in the PRO12 title triumph of 2017.

Following the conclusion of the 2018/19 season, the Welsh-qualified second rower signed a deal to join Top League side Kubota Spears following his release from Scarlets.