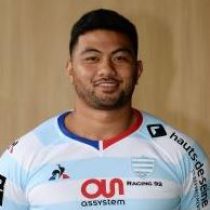 Fa'aso'o came through the Blues under-18 team Auckland age-group sides to the under-20s in 2013, and was the youngest member of their wider training group.

He trialled for the New Zealand under-20s in Palmerston North the following year but wasn't selected.

He was forced to drop down to New Zealand's Heartland Championship with Wairarapa Bush in 2015.

Solid performances there saw him earn another shot at Mitre 10 Cup rugby with the Pukekohe-based Counties Manukau in 2016 where he played all 11 games as the Steelers reached the Premiership Semi-Finals before going down to eventual winners Canterbury.

His appearances in New Zealand brought him to the attention of French-side Racing 92 who announced in November 2016 that they had signed Fa'aso'o on a contract until the end of the 2016–17 Top 14 season.

Following the conclusion of the 2017/18 season he signed a deal to join Brive.