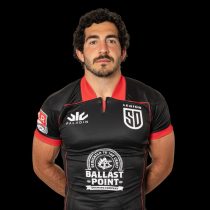 Matyas made his Men’s Eagles Sevens debut at the 2013 Gold Coast Sevens and scored his first try against Spain in the tournament’s Shield Semifinal. He operates in the center and his speed is his main asset.

In January 2017, he was named in the USA Rugby team ahead of the 2017 Americas Rugby Championship.

In May 2017, Matyas was named in the USA Men's Eagles squad for the Emirates Airline Summer Series and Rugby World Cup 2019 Qualifiers this June and July, after winning two caps.