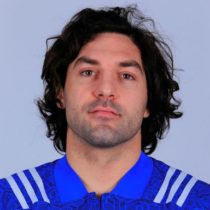 Gourdon is something of a late arrival to international rugby, having been plying his trade for years without too much recognition at Clermont and La Rochelle.

He signed for La Rochelle in summer 2012 making his debut for them in the Pro D2 at home to Oyonnax in the opening round of the season.

He missed only two games in the 2013/14 campaign helping La Rochelle win promotion into the Top 14.

But he has rapidly become a firm favourite of old school coach Guy Noves, who handed him his debut in Argentina and has started him on the flank in five successive Tests.

Really a No.8 by nature, he’s been pivotal to La Rochelle’s rise to second in the Top 14, with his strength, quick feet, dynamic carrying and great hands.

He started all three Autumn internationals as an openside flanker.

Having performed well for France in the 6 Nations and for La Rochelle in the Top 14, Gourdon was named in the France team to face South Africa in June.

January 2018 saw him get included in the French squad for the 2018 Six Nations tournament.