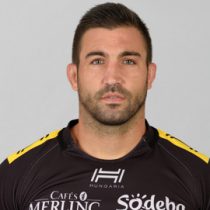 Trained in Montauban, Romain Sazy began his professional career in 2006 when he was just 20 years old.

After 30 appearances for Montauban, Sazy settled down in La Rochelle when he joined the Top 14 in 2010.

During the 2017/2018 season, he extended his commitment to the Club and exceeded the milestone of 200 official matches in Yellow and Black.

As of September 2020, he has made 255 appearances for LA Rochelle and has scored 40 points.