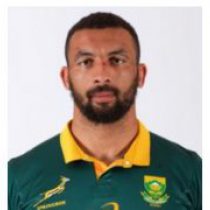 Cassiem represented the Pumas from 2012-2015 and was part of their Vodacom Cup-winning side in 2015.

After stints with the Pumas, the stalwart completed a move to Griquas and was also included in the Cheetahs’ pre-season training squad in late 2015.

After a great season with the Cheetahs, Cassiem was called into Springboks November tour as injury replacement for Blue Bulls flanker Roelof Smit who sustained a torn pectoral muscle injury.

The ball carrying number 8 put pen to paper on a new deal with the Scarlets, linking up with the region ahead of the 2018-19 season from PRO14 side Cheetahs.

Cassiem's solid performances made him a fan favourite at the Welsh region.