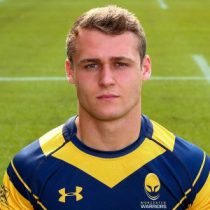 The versatile back, who can play at scrum-half, fly-half or full-back, was handed his first start for Warriors in September 2016 against Bath, where he impressed with two assists and two try-saving tackles.

The promising youngster then scored a brace of tries on his first home start against Sale Sharks, including a sublime solo effort as he raced 60 metres to the whitewash.

October 2016 saw him commit his future to the Worcester Warriors squad.

In the European Challenge Cup, Shillcock was handed a starting berth at fly-half against Enisei-STM in October 2016 and went on to show his capabilities in the number ten jersey, slotting 33 points in five Premiership starts before injuries cut his season short.

The 2017/18 campaign saw Shillcock continue his development, as he played 21 times across all competitions, scoring four tries.

Injuries disrupted Shillcock's progress in 2018/19 but the award of a new contract midway through the season confirmed that he is regarded as a player of immense potential.

He marked his return to action in the Premiership Rugby Cup victory over Leicester Tigers at the start of the 2019/20 season and scored a try off the bench.

Shillcock made his first Premiership start in 19 months at Harlequins in November 2019 and scored a try to help Warriors to victory.