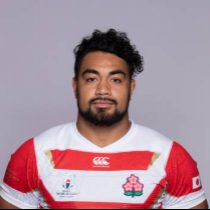 After graduating from university he signed up to play Top League rugby with Yamaha Júbilo in 2014. His appearances were sparse in his first two seasons with Yamaha, but in 2016 he began to be much more of a regular in the side and received Japanese Citizenship the same year.

After only 13 Top League appearances for Yamaha Júbilo, which included 3 starts, Helu received his first call-up to his adopted country, Japan's senior squad ahead of the 2016 end-of-year rugby union internationals.

He debuted as a second half replacement in new head coach, Jamie Joseph's first game, a 54-20 loss at home to Argentina.

He was named in the Japan's squad for the 2019 Rugby World Cup and represented the side 16 times as they head into the quarter finals of the competition.