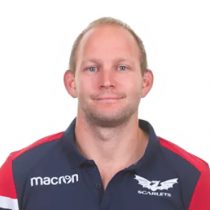 A highly-rated coach, Richard Whiffin has become well known for his work in the London Irish and Gloucester Academies.

Whiffin worked with Argentina during the 2007 Rugby World Cup as an analyst.

is head of the academy at Kingsholm, also working at times with the first team, as well as coaching England Under-20s.

He's worked with the England Saxons side, London Irish and the Argentina national team before Gloucester's Academy.

In May 2019, Whiffin joined the Scarlets coaching staff as an assistant attack coach.