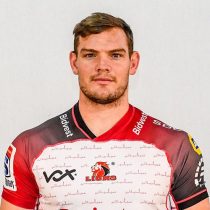 Born in Queenstown, Smit first made his U18 Provincial debut for Border in 2010 before moving to the Bulls in 2011.

A standout performer for the U19 Bulls team in 2012, the flanker then made his senior debut for Bulls during the 2013 Vodacom Cup. Roelof also represented South Africa at the 2013 IRB Junior World Championship.

2014 saw Smit make his Super Rugby debut for the Bulls vs Stormers.

Smit's impressive form saw him represent his country against the Barbarians during the 2017 November tests.

Ahead of the 2017 Super Rugby season Smit has scored one try in 13 appearances for the side.

Injury meant that Smit missed the entire Super Rugby and Currie Cup season and the powerful looseforward will look to make an impact on his return for the Bulls in 2018.

Smit returned for the Bulls during the 2019 Super Rugby season taking his cap tally to 26 and three tries but another testing season with injuries as well as being overlooked by Pote Human saw Smit join the Lions for the 2020 Super Rugby season.