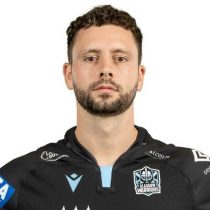 A product of Lornshill Academy and Stirling County, Kennedy featured for Scotland at U18 and U20 level, before receiving representative honours for the national A and 7s sides.

Kennedy's success in Glasgow paved the way for his inclusion in Scotland’s pre-2013 RBS 6 Nations training camp before excelling in his first senior representative match for Scotland A in the win over England Saxons at Kingston Park.

He continued to impress on his return to Edinburgh, keeping opposition defences honest with sharp service and a keen eye for a breakaway. Like his cousin of fellow Edinburgh Rugby player, Grant Gilchrist, the former Lornshill Academy pupil took his first steps in rugby with Alloa and Stirling County rugby clubs, lifting the 2009 National under-18 Youth Cup with the Burnbrae club.

He went on to represent Scotland at every age-grade from under-17 to under-20, featuring in all five 2010 IRB Junior World Championship matches before his progression to the senior ranks.

In May 2017, Edinburgh announced that Sean Kennedy re-signed on a two-year deal, which would see him remain at the club until at least May 2019.

He later surpassed a half-century of Edinburgh caps, and donned the black and red on 55 occasions.

In May 2017, the Edinburgh scrum-half, Kennedy, was added to the national team squad as a replacement for Hidalgo-Clyne.

It was the second time he was called into national team camp, following his inclusion in the squad ahead of the 2013 RBS 6 Nations before earning senior representative honours for Scotland A in the win over England Saxons at Kingston Park.

In April 2019, Kennedy was among seven departing Edinburgh Rugby.

He returned to Glasgow on a one-year partnership contract with Stirling County ahead of the 2019/2020 season.

As of December 11, he has made 7 appearances for Glasgow.