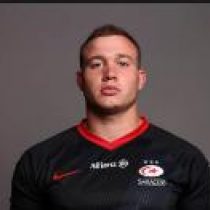 Reffell made Saracens history in February 2019 when he made a massive 39 tackles for the first team in the Premiership Rugby Cup semi-final win at Worcester Warriors, overtaking club legend Jacque Burger’s previous total (34).

A year before, he made his Sarries debut in the Anglo-Welsh Cup in November 2017 against Sale Sharks as well as featuring a number of times for Old Albanian in National League South 2.

Reffell appeared for Ampthill in the division above in 2018/19 and was a key performer in Sarries’ run to the Premiership Rugby Cup final and Storm’s Shield-winning campaign.

The England Under-20 international was rewarded with a Premiership debut in May 2019, coming on as a replacement against Exeter Chiefs, and picked up the club’s Academy Player of the Year award.