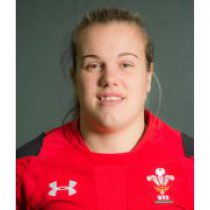 Carys first played rugby for Skewen Under 8s, earning her first cap as a second half replacement against Ireland in the opening round of the 2013 Six Nations.

She captained Wales for the first time (in her 23rd appearance) in the second round of the 2016 Six Nations championship, and led her side to a 23-10 victory over Scotland at the Gnoll.

Carys, who is the daughter of dual rugby international Rowland Phillips, lead Wales into the 2017 Six Nations campaign as captain.