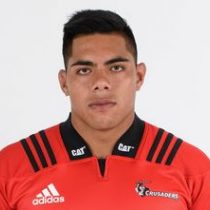 Born into a rugby household where father Vili was a member of the Samoa squad for the 1991 Rugby World Cup, Alaalatoa was quickly introduced into the sporting world and played rugby, volleyball and cricket in his childhood.

He found excellence in rugby and played three years in the Newington College First XV.

A number of impressive performances New South Wales Shute Shield saw him become a regular member of the Waratahs wider training squad in 2014.

Following an injury to regular front-rower, Paddy Ryan, Alaalatoa was called up to the Waratahs first team for the final round of league matches in the 2014 Super Rugby season.

Leading up to the 2015 ITM Cup, Alaalatoa moved to New Zealand and signed to play for Manawatu where he had a solid season that earned him a 2016 super rugby contract with the Crusaders.

In March 2018 Alaalatoa signed a new two-year deal with the Crusaders, effectively choosing the All Blacks over the Wallabies.

He has racked up 38 games for the Crusaders since crossing the Tasman in 2016 and in 2019 made the move full time when he signed for the Canterbury side ahead of the Mitre 10 Cup.

Ahead of the 2020 Super Rugby season, Alaalatoa, named for the Crusaders squad has obtained 75 caps.