Leinster vs Saracens - a statistical perspective

In an unexpected turn of events, Leinster crashed out of the Champions Cup after being defeated by a determined Saracens outfit.

Here’s how things played out in the stats, a look at which makes the result all the more surprising:

The men in blue were heavily dominant here with 63% overall territory.

In the first half, they enjoyed 60% to Saracens’40% before turning up the heat even more in the second stanza with a massive 70%.

Leinster also led in terms of time with the ball, with 63% of the overall possession.

The first half saw Saracens enjoy 45% while things became even tougher in the second half as their percentage dropped to 32.

Johnny Sexton’s charges outscored their opponents 2 tries to 1. It was, however, Leinster’s discipline which ultimately let them down as Saracens managed to slot a total of 6 penalties through the boot of Alex Goode – Leinster only kicked a single penalty. 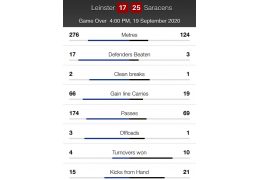 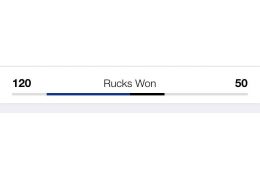 As can be seen from the above, Leinster were unfortunate not to pull through in this game as they were by far the busier side on the pitch.

One area in which Sarries were very effective, however, is the turnovers stat, showing the commitment of the loose-forwards at ruck time.

With Leinster’s above possession stats, it follows that Saracens were forced to put their shoulders to work.

Saracens made a total of 187 tackles to Leinster’s 82. The men in black missed 17 while Leinster were unsuccessful in only 3. 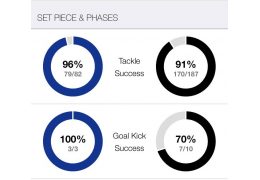 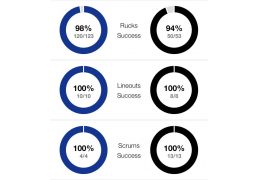 In the other results, Clermont were beaten 36-27 by Rcing 92, Toulouse thrashed Ulster 36-8 while Exeter and Northampton kick off shortly.