James Slipper says Australia are treating the coming days as "Grand Final week" as they prepare to do battle with Uruguay at the Rugby World Cup.

A rousing fightback was unable to prevent the Wallabies from suffering a 29-25 defeat to Wales last Sunday.

Australia are now third with two Pool D matches to play and prop Slipper knows they have to come out firing from the start when they take on Uruguay at Oita Stadium on Saturday.

"It's obviously disappointing with the result we had [against Wales], but essentially now it's Grand Final week for us," said Slipper.

"Both teams have to win. We're preparing like that every game. So, for us, it's just about getting back into work, training hard, making sure we come out and win the game."

Thanks for the welcome Oita! 🇯🇵 Can’t wait to see you all on Saturday against @RugbyUruguay #AUSvURU #GoldBlooded #RWC2019 pic.twitter.com/kI3M161l5i

Jordan Petaia will make history by becoming the youngest Australia player to feature in a World Cup match at the age of 19 after Michael Cheika opted to make 12 changes to his starting line-up.

Matt Toomua also comes into the side for his 50th Test cap after impressing off the bench against the Six Nations champions and the centre is backing teenage wing Petaia to show what the hype is about.

"More so than any other young player, he is just as competent on both sides of the ball: attack and defence. It's not often you say that about young guys. They might have a wicked sidestep or something but Jordy likes getting in the rough and tumble stuff, which is brilliant," said Toomua.

Esteban Meneses has made nine alterations to the Uruguay line-up following a heavy loss to Georgia, with centre Andres Vilaseca named captain as Juan Manuel Gaminara drops to the bench.

Facundo Gattas was given a three-match ban for a dangerous tackle in the 33-7 defeat to Georgia and will learn whether he has been successful with an appeal on Friday. 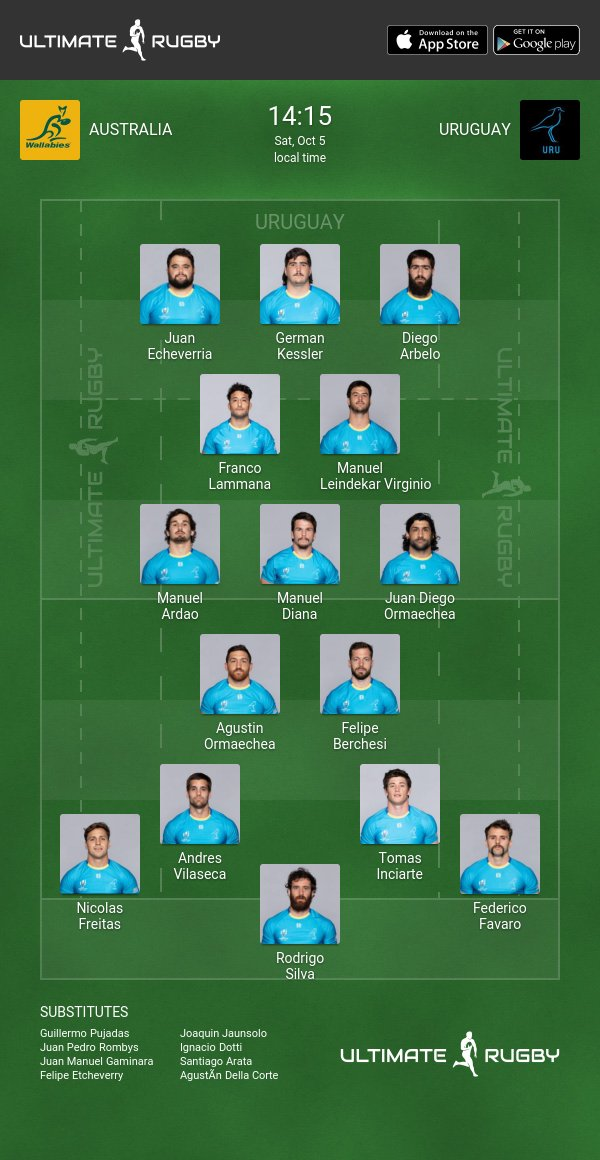 Lealiifano replaces Bernard Foley at fly-half, having been surprisingly dropped for the Wales game. The playmaker can seize his chance to show he should keep the number 10 jersey by getting the Wallabies ticking.

Silva switches from the left wing to full-back and Uruguay will need him to make that a seamless transition as Australia look to pile on the pressure from the start.

- Australia and Uruguay's only previous Test meeting came at the last World Cup, with the Wallabies dishing out a 65-3 drubbing.
- Uruguay's 30-27 victory over Fiji in their opening match of the competition was the first time they had defeated a team from Oceania at a World Cup.
- The Wallabies have trailed at half-time in each of their first two pool matches. Prior to this tournament, they had been behind at the break in only one World Cup pool game - against South Africa in 1995.
- Toomua's 61 metres gained, five defenders beaten and two offloads against Wales were more than he had achieved in any of his previous seven World Cup matches.