Top Stories From This Week The Blues returned to training ahead of Super Rugby Aotearoa and concerns over whether Beauden Barrett would be fit for the Auckland based franchise were quickly put to bed with the former World Player of the Year setting a club record in the fitness testing.

Bristol Bears add Rugby League sensation to their side ahead of next season: The Bristol Bears have added Rugby League sensation Ratu ‘Siva’ Naulago to their ranks for the 2020/21 season. The Fijian-born flyer has scored an impressive 17 tries in 21 appearances for Hull FC, including a double in the 2020 Super League campaign opener versus Leeds Rhinos.

Martin Johnson weighs in on the British and Irish Lions captaincy debate: Former British and Irish Lions and England captain Martin Johnson has dismissed any suggestion that Alun Wyn Jones will be too old to be the next Lions tour captain.

Tyler Bleyendaal calls time on his career with immediate effect: 🎥 VIDEO | Following the news of his injury-enforced retirement, we spoke to Tyler Bleyendaal about his career and highlights of his time at Munster.

Pieter-Steph du Toit commits to the Stormers after withdrawing contract: World Rugby Player of the Year Pieter-Steph du Toit has ended the speculation around his future by withdrawing his contract termination notification submitted last week and committed his future to Western Province Rugby. This contract extension means that Du Toit will remain with the Stormers until at least the end of the British and Irish Lions tour next year and will receive the same salary reduction as his teammates, as per the rugby industry’s financial impact plan. The fleet-footed World Cup winner, who turned 25 on Wednesday, is one of the most exciting outside backs in South Africa and will add firepower to a Stormers backline which already features the likes of Herschel Jantjies, Damian Willemse, Sebaelo Senatla and Sergeal Petersen. Following the World Rugby meetings in March this year, SANZAAR and the Six Nations (“the Nations”) have been working closely over the lockdown period against a set of key principles between the parties, to develop and agree proposals for an aligned global calendar.

Wasps veteran Jimmy Gopperth has signed a new contract at the club - a month before his 37th birthday. He will be adding to his 96 appearances. 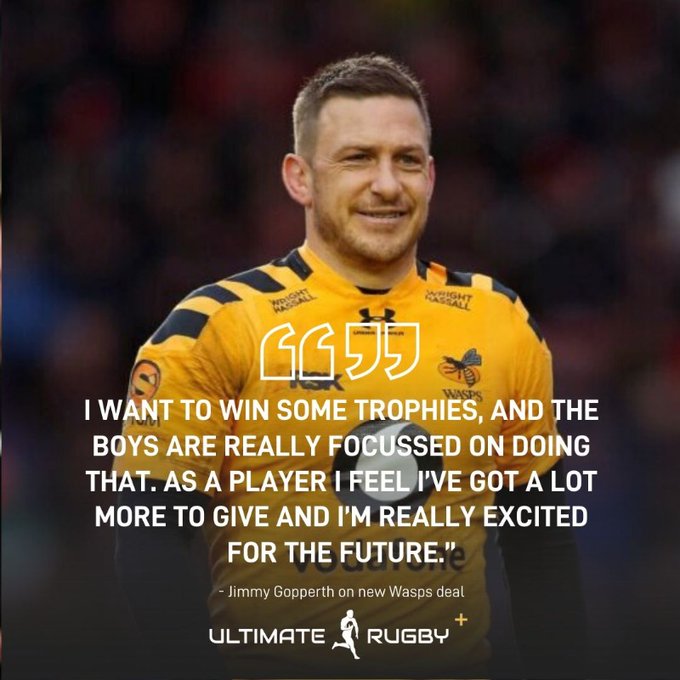 The IRFU CEO Philip Browne has confirmed that inter-provincial derbies have been planned to kick-off on August 22/23 at the Aviva Stadium behind closed doors.

During a media update, Browne announced Irish Rugby’s ‘Return to Train and Play’ proposals have been submitted to Government and that the weekend of August has been set for the targeted resumption of PRO14 derby fixtures involving the four provinces.