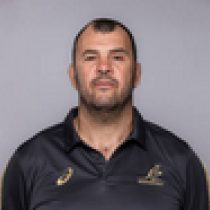 Cheika played for Australia at under 21 level, and played more than 300 games for Randwick, winning the Shute Shield seven times.

A move to Europe in 1989 saw Cheika take the field for Castres Olympique, Stade Français and then joined Italian side Rugby Livorno, a signing that saw him represent an Italian Selection XV against the All Blacks in 1993.

Joining the Waratahs as coach in 2012, Cheika led the team to its first-ever Super Rugby title in 2014, defeating the most successful club in Super Rugby history the Crusaders 33-32.

He has also coached Irish provincial side Leinster for five years and won the club’s first ever Heineken Cup in 2009.

Cheika was appointed Qantas Wallabies Head Coach in October 2014, following a successful playing and coaching career in Australia and Europe.