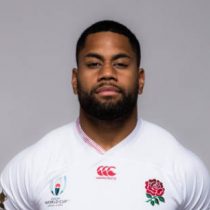 Cokanasiga was born in Fiji but moved to England aged three to follow his father Ilaitia who was in the Army. Tours to Germany and Brunei followed before returning to the UK in 2013.

He smashed his way through junior rugby, but after a few months training full-time with the London Irish senior squad he has had to learn new tricks.

The winger joined the academy full time in the summer of 2015. Having been involved in both the U18s Academy league as well as the A-League, Joe has played a lot of senior rugby this season.

He was included in the England U20 6 Nations squad for the 2017 tournament before getting a call up as one 15 uncapped players in the senior England squad for their two-Test tour to Argentina in June 2017.

October 2017 saw him sign a four-year deal with London Irish, having scored five tries in 12 appearances for the club the previous season.

Standing at 6ft 4” and tipping the scales at almost 18 stone, Cokanasiga scored five tries in 12 appearances in the 2016 season including a sensational solo effort on his debut against London Scottish.

As of the 2018/2019 Champions Cup, Cokanasiga has had 5 European Cups appearances and was named in Jones' England squad ahead of the November Internationals