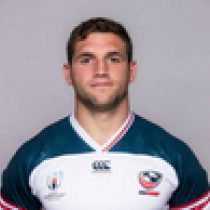 Bryce Campbell is a Collegiate All American and D1A Player of the Month winner with Indiana University, the most recent Big Ten champions.

Campbell would be selected to the USA Rugby AIG Men's Collegiate All-American Tour to Queensland in 2016 and made his debut with the USA Rugby Selects at the 2016 Americas Pacific Challenge. During the Selects' come-from-behind victory, Campbell was seen throwing his opposition to the turf with a ferocious stiff-arm that later made SportsCenter's top-10 plays. While on tour with the Selects, Campbell caught the eye of the Men's Eagles coaching staff and was brought in to Eagles camp.

In November 2016, Campbell made his Men's Eagles debut as a starter in an uncapped match against the Maori All Blacks. Campbell earned his first International cap one week later against Romania, coming on a sub in the team's Fall International match.