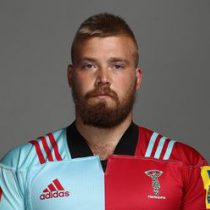 Growing up in South Africa, Holenstein began his sporting career as a javelin thrower, before turning his attention to rugby by joining Pretoria Harlequins.

In 2014 he played for the Sharks U19 Currie Cup team, where his path crossed with current Harlequin Tim Swiel.

Moving to French side Pau in 2015, he helped them remain in the top tier of French rugby. Cameron is a promising young player who brings a huge physical presence both at scrum time and in defence.

In August 1st, 2016, Harlequins confirmed to have signed the prop with immediate effect.

June 2018 saw him sign a deal with Jersey Reds.