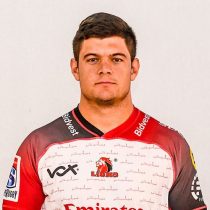 In 2016 he made his first-class debut for the Blue Bulls in the Currie Cup qualifying campaign.

Later that year he was named in the South Africa U20s squad for the 2016 U20 World Cup.

The young hooker then went on to help Tuks lift the 2017 Varsity Cup and subsequently earned his spot in the Blue Bulls 2017 Currie Cup squad.

Son to former Bulls prop Lourens Campher, Jan-Henning made his Super Rugby debut with the Lions in 2019.