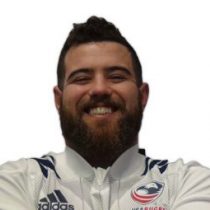 Waldren is playing his club rugby for Blackrock College RFC in Dubli, as he finishes up his college degree.

Waldren has earned seven caps for the US Eagles after making his debut against Romania in November 2016. His last appearance for the Americans was against Canada in July.

In August 2017, Waldren signed for London Scottish adding significant depth to a formidable looking scrum for the 2017/18 campaign.

The tight-head prop arrives at the Athletic Ground after representing his country in the summer.