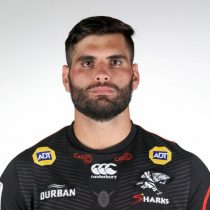 A huge specimen, Ruben van Heerden represented the Blue Bulls at Craven week and was selected for the SA Schools side.

He went on to make his first class debut straight out of school in 2016.

2017 saw the youngster being selected for the Bulls Super Rugby squad as well as the SA U20s.

He was included in the SA squad for the Junior World Cup and made his Super Rugby debut against the Southern Kings.

In September 2018, Sharks announced the signing of the Bulls lock on a three-year contract.