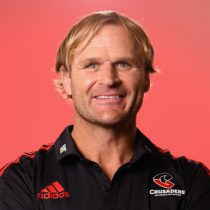 Scott Robertson is a former New Zealand and Crusaders flanker turned Coach. Robertson earned 23 caps for the All Blacks scoring 4 tries, before going abroad to represent Irish side Ards RFV and French side Perpignan. His final club, before retiring, was Ricoh Black Rams in Japan.

Following his retirement Robertson has gone on to coach in New Zealand, he started coaching at Sumner Rugby Club, Christchurch, New Zealand. He became the Canterbury Assistance Coach from 2008 to 2012, before taking over as the Head Coach in 2013 following the departure of Tabai Matson, he guided them to ITM Cups Titles in 2013 and 2015.

Robertson was announced as the Crusaders Head Coach following the departure of longtime Head Coach, Todd Blackadder to Bath. Robertson tookover the Crusader for his maiden Super Rugby season in 2017.

He continued his impressive start to his coaching career leading the Crusaders to their 8th Super Rugby title in his first season at the helm.

Robertson went onto coach the Barbarians against his home nation in November 2017 and defended his sides' Super Rugby title in 2018.

The Crusaders also made history with their 2017 victory in Johannesburg, becoming the first team to travel to South Africa for a Final and return with the Super Rugby trophy. In guiding the team to that title, Robertson also became the first person to win a Super title as both a player and a coach.

In February 2019, with a win-loss record of 35-3 since his first season in charge, Robertson re-committed to the Crusaders for the 2020 and 2021 seasons. In December 2020, Robertson was named as the NZ Rugby National coach of the year winning the award for the second time having guided the Crusaders to the Super Rugby Aotearoa title.