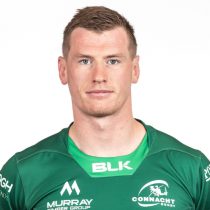 Gavin attended Blackrock College in Dublin and was a member of the 2012 Senior Cup Team. After completing three years in the Leinster academy upon leaving school, he was granted a fully professional development contract for the 2015-16 season.

Thornbury spent six months in New Zealand where he initially joined club side Border on the North Island.

Having helped Border to title glory in the Wanganui premier club competition, the former Ireland U-20’s player earned a place in the Wanganui provincial representative team, who play in the Heartland Championship – the tier below New Zealand’s Mitre 10 Cup. The lock was part of the Wanganui team that won the Meads Cup in October 2016.

Thornbury’s successful stint in New Zealand came after his first season as a professional with Leinster which was unfortunately affected by injury.

In April 2017, Connacht Rugby and the IRFU announced the signing of Thornbury on a two-year deal.

He made 13 appearances in his debut PRO14 season with Connacht.

As of April 2020, he has made 38 appearances for the Irish province and has scored 15 points.