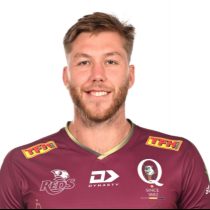 A recipient of the John Eales Rugby Excellence Scholarship at Bond University, the skillful lock was named in the Australian Schoolboys Barbarians side in 2016 following some stellar performances for Southport School.

2017 saw Blyth represent Queensland U20s and later that year he was named in the Australian U20s side for the 2017 U20s World Championship in Georgia.

2019 saw him capitalize on his maiden taste of the Super Rugby the previous year with seven matches for the Reds.

In August 2019 he signed a new deal to remain at Ballymore and in Australian Rugby through 2023.