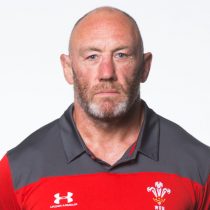 Bangor born Robin McBryde was the Forwards Coach to the Wales National squad having also been a WRU National Skills Coach, providing specialist coaching to Wales's young talent in the regional academies.

Former hooker McBryde made 37 capped appearances for Wales during an international career spanning eleven years. Making his debut against Fiji in 1994, he played on four occasions for Wales during the 2003 Rugby World Cup.

Part of the Grand Slam winning Welsh side in 2005, McBryde received a call-up to the British and Irish Lions tour squad to Australia in 2001 but sustained an injury that forced him out of contention.

Domestically, McBryde was a Llanelli and, after the inception of regionalism, Scarlets stalwart.

He played more than 250 games after his debut appearance on October 1st 1994 against Cardiff at the Arms Park for the club and captained Llanelli to victory in the Welsh Cup final of 1998 and the Welsh Championship title in 1999. His previous clubs include Menai Bridge, Mold and Swansea.

Since retiring in 2005, McBryde has immersed himself in coaching initially with the Scarlets and then with Wales as forwards coach to the senior national squad and also as a WRU National Skills Coach, providing specialist coaching to Wales’ young talent in the regional academies.

He took over the Wales head coach role during the North American tour of Canada and USA in 2009 while Warren Gatland and Rob Howley were on Lions duty in South Africa. He also headed up the tour to Japan in 2013 while Gatland was involved in the British & Irish Lions tour of Australia as well as the 2017 June Internationals against Samoa & Tonga.

In April 2019, Leinster confirmed that McBryde would join the Province after the Rugby World Cup in Japan as a scrum coach.