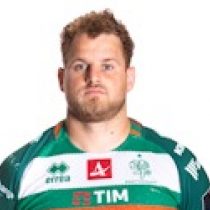 Baravalle was part of the Under 18 Argentina side in 2011 competing in the South American championship, as well as with the Jaguars in the Tbilisi Cup in the 2013/2014 season and the following year with Argentina at the Rugby World Nations Cup.

In September 2017, he was signed by Benetton Treviso to fill the void left by injured duo, Engjel Makelara and Ornel Gega.

After 36 appearances for Treviso, he signed a new deal keeping him with the side until June 30, 2022.