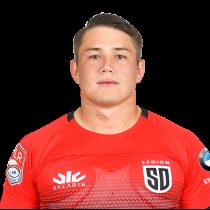 Nathan enjoyed exposure to infamous Southern Hemisphere rugby on a trip to Australia where he trained with the Randwick Rugby Club’s under-20 squad in 2016.

In 2018, Sylvia graduated from collegiate rugby to earning his men’s club stripes on the windswept fields of San Francisco Golden Gate, debuting against Belmont shore in the Pacific Rugby Premiership.

Sylvia has enjoyed a meteoric rise in rugby, with 2020 seeing him return to anchor the San Diego Legion front row after a successful inaugural season in 2018 and offered the side's forwards coach Scott Murray another option for a skilled tighthead prop.